Where people in prison come from: The geography of mass incarceration in Maryland 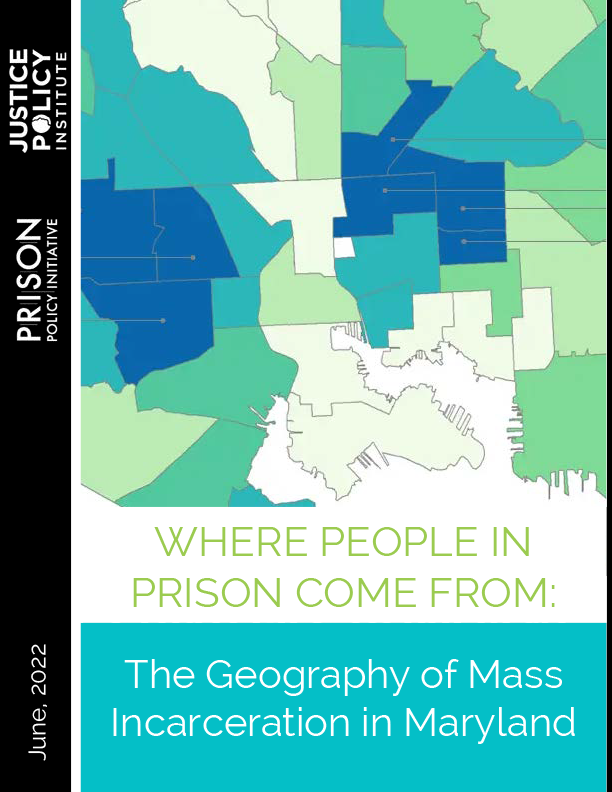 One of the most important criminal legal system disparities has long been difficult to decipher: Which communities throughout the state do incarcerated people come from? Anyone who lives in or works within heavily policed and incarcerated communities intuitively knows that certain neighborhoods disproportionately experience incarceration. But data have rarely been available to quantify how many people from each community are imprisoned with any real precision.

But now, thanks to a redistricting reform that ensures incarcerated people are counted correctly in the legislative districts they come from, we can understand the geography of incarceration in Maryland with up-to-date data. Maryland is one of over a dozen states that have ended prison gerrymandering, and now count incarcerated people where they legally reside — at their home address — rather than in remote prison cells for redistricting purposes. This type of reform, as we often discuss, is crucial for ending the siphoning of political power from disproportionately Black and Latino communities to pad out the mostly rural, predominantly white regions where prisons are located. And when reforms like Maryland’s are implemented, they bring along a convenient side effect: In order to correctly represent each community’s population counts, states must collect detailed state-wide data on where imprisoned people call home, which is otherwise impossible to access.

Using this redistricting data, we found that in Maryland, incarcerated people come from all over the state, but are disproportionately from Baltimore City. Looking at local data, we also find that some areas of the state — like the southern Eastern Shore and Hagerstown — are also disproportionately affected by incarceration. While Maryland incarcerates a smaller share of its residents than all but 13 U.S. states, examining these data by county, city, and even neighborhood reveals surprising and troubling patterns of high incarceration in both specific communities within Baltimore and also the smaller and historically under-resourced Eastern Shore communities.

In addition to helping policy makers and advocates effectively bring reentry and diversion resources to these communities, this data has far-reaching implications. Around the country, high imprisonment rates are correlated with other community problems related to poverty, employment, education, and health. Researchers, scholars, advocates, and politicians can use the data in this report to advocate for bringing more resources to their communities.