When Treatment is Punishment: The Effects of Maryland’s Incompetency to Stand Trial Policies and Practices 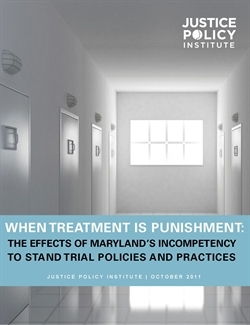 At the end of FY2011, two out of every three people (68 percent) in state psychiatric hospitals in Maryland were on forensic status, meaning they were involved in the justice system, either as incompetent to stand trial (IST) or after a finding of “not criminally responsible.” While the total number of people treated in state hospitals in Maryland has decreased 18 percent since FY2006, the number committed as IST increased 113 percent since FY2006, from 163 people to 348 in FY2011.

For Spring Grove Hospital Center (Spring Grove), where the majority of IST patients are committed by the Baltimore City District Court, this percentage increase is even greater: the number of people committed as IST increased 335 percent since FY 2006, from 34 people to 148 at the end of FY2011.

This increase in the number of forensic IST commitments is happening at the same time that Maryland is diverting civil admissions to private and community hospitals by purchasing beds in those settings, closing state hospitals and reducing beds in many facilities. The reasons for this shift include a belief that most people are more appropriately served in hospitals and outpatient settings located in their own communities, and for cost-containment purposes. However, due to the increasing numbers of forensic patients, including IST patients, state hospitals are still operating at or above capacity.

Increasing commitments by the courts and increasing lengths of stay for people who are committed puts intense pressure on Maryland to continue operating at current state hospital bed capacity, and perhaps even consider expanding. During the 2011 legislative session, the budget committee of the Maryland General Assembly reallocated $200,000 from the general fund appropriation made to support the operations of the state hospitals for Department of Health and Mental Hygiene (DHMH) to use for an independent study on (a) potential demand for state hospital capacity, including the maximum appropriate use of community-based alternatives; and (b) best practices for facility operations, including building size and configuration; and (c) appropriate site locations based on future demand.

An accurate analysis of future need for state hospital beds cannot be made without close scrutiny of the legitimacy of current use of beds by the courts, particularly the rapidly increasing IST population. As Spring Grove alone saw a 335 percent increase in IST patients, examining court practices— especially those of the Baltimore City District Court, which makes up the majority of IST commitments to Spring Grove—is necessary to make sure courts are using IST commitments appropriately and effectively.