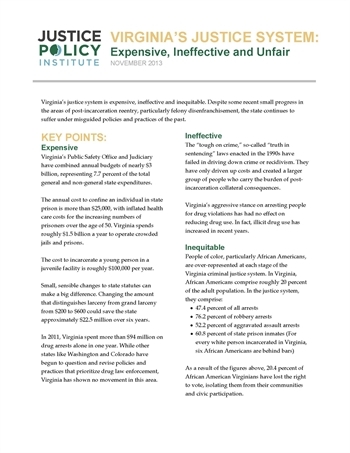 With the 8th highest jail incarceration rate in the U.S., 1 of every 214 adult Virginians is behind bars in county jails across the state; African-American youth over-represented in the juvenile justice system; and the Commonwealth’s overreliance on incarceration – largely as a result of arresting Virginians for drug offenses – Virginia has an over-burdened correctional system unable to consistently provide services or safety.

Virginia’s Justice System: Expensive, Ineffective and Unfair points to reforms that, if implemented, would result in relief for Virginians directly impacted by the justice system and taxpayers alike.

The policy brief — the first in a series of publications being released by JPI as a group of justice advocates and concerned stakeholders have been meeting in the Commonwealth to discuss pushing for reforms — is an overview of the Commonwealth’s adult and youth justice system, which identifies areas of progress – like the recent effort to re-enfranchise formerly incarcerated residents with voting rights and other civil rights – and also identifies solutions to revise ineffective policies and practices of the past that remain in place.