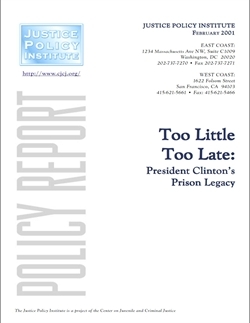 Preserving law and order has historically been a Republican issue. Barry Goldwater, Lyndon Johnson’s losing opponent in the 1964 presidential race, was the first to campaign on crime control in an attempt to counter the prevailing “liberal” mood of the 1960’s. Following Goldwater’s lead, Richard Nixon called for an increase in punitive crime control measures and a “war on drugs” that led to an increase in incarceration for low-level drug offenders. The Republican National Committee’s unleashing of the now famous “Willie Horton” advertisement during the race between Vice President George Bush and Massachusetts Governor  Michael Dukakis solidified the rhetorical advantage held by Republicans in the law and order arena.

When William Jefferson Clinton took office in 1993, he was embraced by some as a moderate change from the previous twelve years of tough on crime Republican administrations. Now, eight years later, the latest criminal justice statistics show that it was actually Democratic President Bill Clinton who implemented arguably the most punitive platform on crime in the last two decades. In fact, “tough on crime” policies passed during the Clinton Administration’s tenure resulted in the largest increases in federal and state prison inmates of any president in American history.