The Need for a Second Look in Virginia 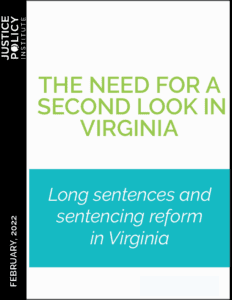 Virginia is at a crossroads entering the 2022 legislative session. Progressive reforms, including abolishing the death penalty and broadening appeal rights, were a focal point of the last several years, but were primarily partisan with the support of only three Republicans. In 2022, control of Virginia will split, with the House of Delegates and Executive Branch controlled by Republicans, and the Senate of Virginia slightly leaning Democrat. While this poses a challenge for legislative activity, it provides an opportunity to step back and explore the critical issues faced by Virginia’s adult criminal justice system.

The number of people in Virginia’s prison system, which declined for the first time in 2009 after four decades of growth, has plateaued in recent years. Virginia’s system remains plagued with dysfunction that disproportionately impacts communities of color and keeps people locked up for extremely long sentences.

These practices have resulted in a costly system. In 2014, the Justice Policy Institute reported that Virginia spent $1.064 billion to run its prison system, and even with a population decrease, the 2020 budget increased 25 percent to $1.34 billion. However, this is only part of the story. The toll of mass incarceration in Virginia has fallen disproportionately on the shoulders of its Black and Brown citizens, with devastating consequences. This is particularly pronounced among those persons serving extreme prison sentences.