Swing States: Crime, Prisons and the Future of the Nation 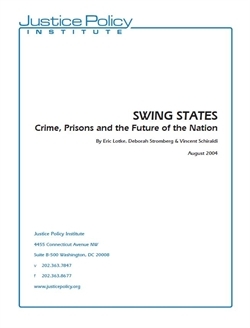 Prisons are a growing part of life in America. The United States currently holds 2.1 million people in prison or jail, and one in every 15 Americans born in 2001 is expected to serve at least a year in prison sometime during their lives. In some towns, where factories have closed or jobs moved overseas, prisons are the largest employer and the economic lifeblood of the community. Adding people on probation and parole, there are nearly 7 million people under correctional supervision in America, more people than in our eight least populous states combined. Organized differently, these people would have 16 votes in the United States Senate.