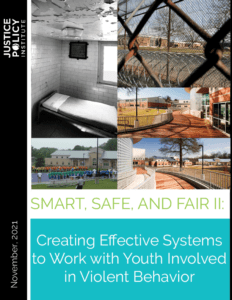 In the 1990s, many jurisdictions adopted draconian policies to deal with a perceived wave of juvenile crime. By 2000, however, juvenile crime rates had dropped precipitously; since then, the number of youth confined in facilities away from home has decreased by 60 percent.

Given political predictions, the drop is instructive, and there is no evidence the trend will slow any time soon. Advances in research, effective advocacy, declining juvenile crime rates, and other factors have helped propel reform forward, leading many states to close youth prisons and prioritize community-based interventions.

Positive youth justice (PYJ) stresses the idea that all youth, regardless of circumstances or background, can build the competencies and relationship building skills that will allow them to develop into strong adults and be assets to their communities.

Despite reforms, more than 48,000 justice-involved youth around the country remain confined outside of their homes. Nine out of ten are held in locked facilities, and two-thirds remain in custody for more than a month. These placements are often expensive, unfair, and unjust, and the research is clear that many of the youth convicted of violent crime are better treated in community-based settings rather than secure facilities. In addition, and of great concern, the declining youth incarceration rate has not benefited racial groups equally. Black youth are overrepresented in confinement.