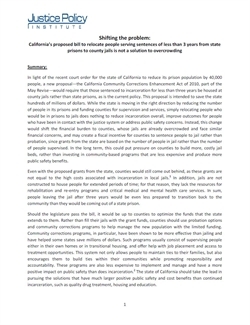 In light of the recent court order for the state of California to reduce its prison population by 40,000 people, a new proposal—the California Community Corrections Enhancement Act of 2010, part of the May Revise—would require that those sentenced to incarceration for less than three years be housed at county jails rather than state prisons, as is the current policy. This proposal is intended to save the state hundreds of millions of dollars. While the state is moving in the right direction by reducing the number of people in its prisons and funding counties for supervision and services, simply relocating people who would be in prisons to jails does nothing to reduce incarceration overall, improve  outcomes for people who have been in contact with the justice system or address public safety concerns. Instead, this change would shift the financial burden to counties, whose jails are already overcrowded and face similar financial concerns, and may create a fiscal incentive for counties to sentence people to jail rather than probation, since grants from the state are based on the number of people in jail rather than the number of people supervised. In the long term, this could put pressure on counties to build more, costly jail beds, rather than investing in community-based programs that are less expensive and  produce more public safety benefits.