Schools and Suspensions: Self-Reported Crime and the Growing Use of Suspensions 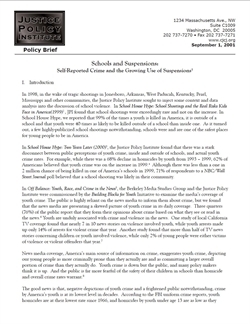 In 1998, in the wake of tragic shootings in Jonesboro, Arkansas, West Paducah, Kentucky, Pearl, Mississippi and other communities, the Justice Policy Institute sought to inject some context and data analysis into the discussion of school violence. In School House Hype: School Shootings and the Real Risks Kids Face in America(1999) , JPI found that school shootings were exceedingly rare and not on the increase. In School House Hype, we reported that 99% of the times a youth is killed in America, it is outside of a
school and that youth were 40 times as likely to be killed outside of a school than inside one. As it turned out, a few highly-publicized school shootings  notwithstanding, schools were and are one of the safest places for young people to be in America.