The Ungers, 5 Years and Counting

A landmark court case, Unger v. Maryland, offers powerful lessons for policymakers and stakeholders interested in tackling mass incarceration. The 2012 case centered on remedying improper jury instructions and applied to a cohort of people who had been sentenced prior to 1981. The decision resulted in the potential release of 235 people from Maryland prisons who had served more than 30 years, and their release story created a natural experiment from which other states can learn. What makes the Unger decision particularly unique is that private philanthropy, through the Open Society Institute–Baltimore, provided specialized reentry programming to be made available to those individuals upon release. In the six years since the decision, we have learned a number of important lessons. These include:

NEW short film, The Ungers: A Matter of Time 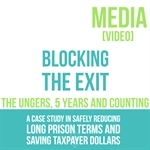 The Right to A Fair Trial: Coming Home, OSI-Baltimore, https://www.osibaltimore.org/2014/06/the-right-to-a-fair-trial-coming-home/

A Matter of Time: The Causes and Consequences of Rising Time Served in America’s Prisons, Urban Institute, https://apps.urban.org/features/long-prison-terms/intro.html

The High Cost of Low Risk, The Osborne Association, http://www.osborneny.org/resources/the-high-costs-of-low-risk/

Everywhere and Nowhere: Compassionate Release in the States, FAMM, https://famm.org/our-work/compassionate-release/

At America’s Expense: The Mass Incarceration of the Elderly, ACLU, https://www.aclu.org/americas-expense-mass-incarceration-elderly

Geriatrics and the Legal System, The Journal of the American Academy of Psychiatry and the Law, http://jaapl.org/content/45/2/208