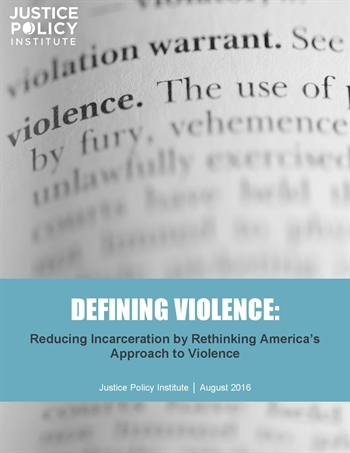 While the national conversation and policy reforms have focused on reducing the incarceration of people convicted of nonviolent offenses, just under half the people in prison have been convicted of a violent crime.

In Defining Violence, JPI says it’s impossible the U.S. will be able to lower its incarceration rate significantly without changing how the justice system treats violent crimes.

Defining Violence surveys the current debate in state legislatures and Congress on criminal justice reform, noting where justice reform proposals have been mired down in debates over what constitutes a violent crime, how justice systems treat violent crimes, and how these debates have made it challenging to making lasting justice reform possible.

To address this complicated issue, we need to rethink how the justice system responds to violent crimes, starting with how these crimes and behaviors are defined, and how that affects prison populations. Who defines a behavior as violent, how the justice system treats these behaviors, and whether the approach to violent crime makes us safer needs to be scrutinized if we are ever going to make meaningful reductions in the use of incarceration.

Help spread the word about our new report and convince our policymakers to start rethinking how we are #DefiningViolence! Use the report hashtag, and send your own posts from our social media toolkit.

View work done by others that helps contextualize Defining Violence.

Senator Corey Booker (NJ-D) on moving beyond the offense. At the 2015 Bipartisan Summit on Criminal Justice Reform, Senator Corey Booker spoke about the need to move beyond a discourse about “nonviolent offenders” to reduce prison and jail populations.

Mass Incarceration: The Whole Pie 2016 show half the people in state prison are there for violent offenses. This Prison Policy Initiative report presents one graph showing the offense the composition of the United States’ prison and jail population.

Expanding the Reach of Victim Services, from the Vera Institute for Justice and referenced in Defining Violence.