Poor Prescription: The Cost of Imprisoning Drug Offenders in the United States 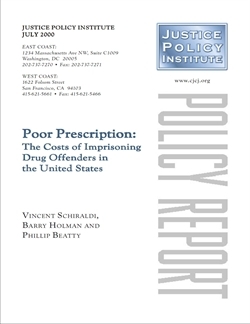 As America entered the new millennium we culminated the most punishing decade in our nation’s history. While the number of persons in jail and prison grew by 462,006 in the seven decades from 1910 to 1980, in the 1990s alone, the number of jail and prison inmates grew by an estimated 816,965. As the millennium turned, America’s prison and jail populations approached the 2 million mark, with that dubious distinction likely to be achieved within a year of the release of this report.

The cost of this massive growth in incarceration is staggering. Americans will spend nearly $40 billion on prisons and jails in the year 2000. Almost $24 billion of that will go to incarcerate 1.2 million nonviolent offenders. Meanwhile, in two of our nation’s largest states, California and New York, the prison budgets outstripped the budgets for higher education during the mid-1990s. The number of people behind bars not only dwarfs America’s historical incarceration rates; it defies international comparisons as well. While America has about 5% of the world’s population, almost one in four persons incarcerated worldwide are incarcerated in the US.