Juvenile Justice Reform in Connecticut: How Collaboration and Commitment Have Improved Public Safety and Outcomes for Youth

Juvenile Justice Reform in Connecticut highlights the past two decades of Connecticut’s successful efforts to improve responses to youth who engage in delinquent behavior and to reduce the number of youth placed into detention centers, correctional training schools, and/or other residential facilities.Specifically, the state reduced residential commitments from 680 in 2000 to 216 in 2011 (nearly 70 percent), even though most 16 year-olds, who were previously treated as adults, are now handled in the juvenile system. The state has also closed one of its three state-operated detention centers, and reduced the under 18 population in Connecticut’s adult prisons from 403 in January 2007 to 151 in July 2012. Meanwhile, Connecticut expanded its investment in evidence-based, family-focused adolescent treatment programs from $300,000 in 2000 to $39 million in 2009. 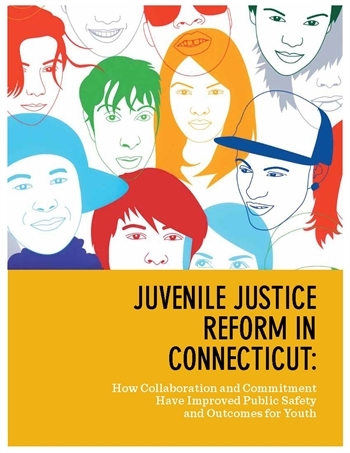 For decades, Connecticut was one of only three states that prosecuted and punished all 16 and 17 year-olds as adults. In 2007, the state enacted historic legislation to ‘raise the age’ of juvenile jurisdiction from 16 to 18, effective January 1, 2010 for 16 year olds and July 1, 2012 for 17 year olds. Even before 17 yearolds became eligible for juvenile court on July 1, 2012, the new law had enabled 8,325 16 year olds to avoid prosecution and punishment in the adult criminal justice system.  In addition, Connecticut has outlawed detention for youth accused of status offenses (like truancy and running away from home) that would not be illegal if committed by adults, and created a new treatment system to keep nearly all status offenders out of the court system entirely.

Executive summary of Juvenile Justice Reform in Connecticut: How Collaboration and Commitment Have Improved Public Safety and Outcomes for Youth

Full report of Juvenile Justice Reform in Connecticut: How Collaboration and Commitment Have Improved Public Safety and Outcomes for Youth