For Better or For Profit: How the Bail Bonding Industry Stands in the Way of Fair and Effective Pretrial Justice

As early as 1912 – 100 years ago – critics were concerned that poor people remained in jail while awaiting trial solely because of their inability to pay even small bail amounts, that bail bondsmen had become too prominent in the administration of justice and that corruption plagued the industry. Amazingly, these issues still apply to the for-profit bail bond system in today, the Justice Policy Institute shows in its report new report, For Better or For Profit: How the Bail Bonding Industry Stands in the Way of Fair and Effective Pre-Trial Justice. 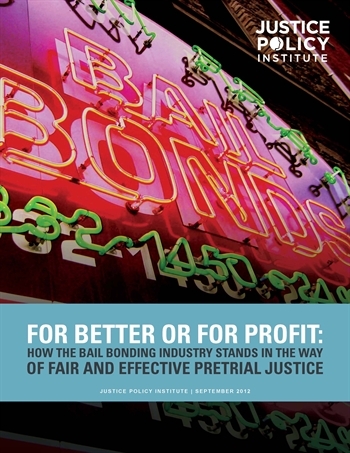 There are approximately 15,000 bail bond agents working in the United States, writing bonds for about $14 billion annually. Bail bond companies take billions from low-income people, with no return on investment in terms of public safety and added costs to communities, according to JPI’s findings. Backed by multibillion dollar insurance giants, the for-profit bail bonding industry maintains its hold in the pretrial system through political influence.

For Better or For Profit recommends the U.S. should end for-profit bail bonding; promote and further institutionalize pretrial services; and require greater transparency within the industry.