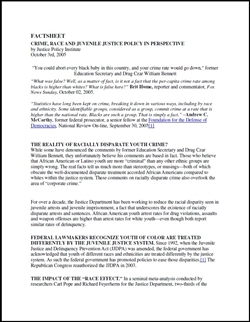 While some have denounced the comments by former Education Secretary and Drug Czar William Bennett, they unfortunately believe his comments are based in fact. Those who  believe that African American or Latino youth are more “criminal” than any other ethnic groups are simply wrong. The real facts tell us much more than stereotypes, or  musings—both of which obscure the well-documented disparate treatment accorded  African Americans compared to whites within the justice system. These comments on racially disparate crime also overlook the area of “corporate crime.”

For over a decade, the Justice Department has been working to reduce the racial disparity seen in juvenile arrests and juvenile imprisonment, a fact that underscores the existence of racially disparate arrests and sentences. African American youth arrest rates for drug violations, assaults and weapon offenses are higher than arrest rates for white youth—even though both report similar rates of delinquency.