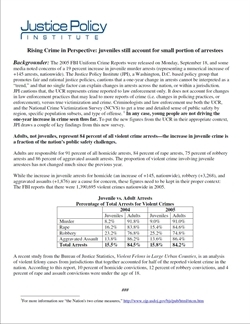 The 2005 FBI Uniform Crime Reports were  released on Monday, September 18, and some media noted concerns of a 19 percent increase in juvenile murder arrests (representing a numerical increase of +145 arrests, nationwide). A one-year change in arrests cannot be interpreted as a “trend,” and no single factor can explain changes in arrests across the nation, or within a jurisdiction. JPI cautions that, the UCR represents crime reported to law   enforcement only. It does not account for changes in law enforcement practices that may lead to more reports of crime (i.e. changes in policing practices, or enforcement), versus true  victimization and crime.