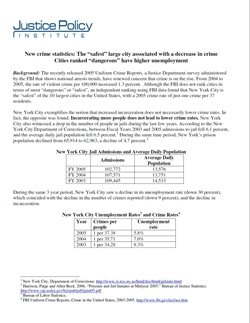 The recently released 2005 Uniform Crime Reports, a Justice Department survey administered by the FBI that shows national arrests trends, have renewed concern that crime is on the rise. From 2004 to 2005, the rate of violent crime per 100,000 increased 1.3 percent. Although the FBI does not rank cities in terms of most “dangerous” or “safest”, an independent ranking using FBI data found that New York City is the “safest” of the 10 largest cities in the United States, with a 2005 crime rate of just one crime per 37 residents.