Due South: Looking to the South for Criminal Justice Innovations 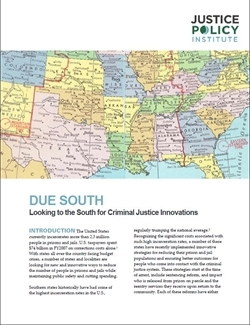 Southern states historically have had some of the highest incarceration rates in the U.S., regularly trumping the national average. Recognizing the significant costs associated with such high incarceration rates, a number of these states have recently implemented innovative strategies for reducing their prison and jail populations and ensuring better outcomes for people who come into contact with the criminal justice system. These strategies start at the time of arrest, include sentencing reform, and impact who is released from prison on parole and the reentry services they receive upon return to the community. Each of these reforms have either already shown positive results or have significant potential to reduce prison or jail populations, save money and improve public safety.

While a number of challenges still face these states and localities around their criminal justice policies, these reforms indicate a significant step toward more fair and effective policies.

Although a number of states and localities have implemented or are in the process of creating reforms for youth involved in the juvenile justice system, this brief reviews only adult criminal justice reforms.