Drug Policies in the State of Michigan—Economic Effects 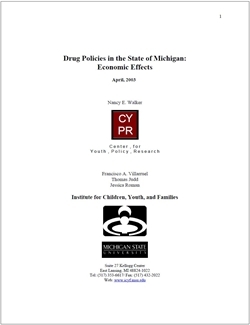 At a cost of approximately $28,000 per person, the State of Michigan currently spends in excess of $160 million dollars each year to incarcerate drug offenders. The actual cost to Michigan taxpayers is much higher because costs of incarceration do not include costs associated with crime investigation, prosecution, and defense of individuals charged with drug offenses.

Nationwide, 80% of all offenders in prisons and jails—about 1.5 million individuals—are substance abusers, and two-thirds of the 3 million probationers under court supervision are involved with alcohol or drugs. Of the approximately 50,000 individuals imprisoned in 2001 in  Michigan, 5,713 were incarcerated specifically for drug offenses—up from a few hundred in the 1980s.