Deep Impact: Quantifying the Effect of Prison Expansion in the South 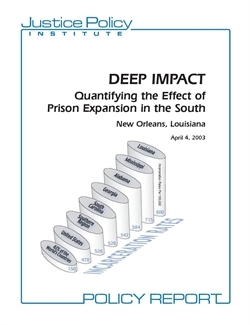 From 1980 to 2002, the number of people incarcerated in the nation’s prisons, jails, juvenile facilities and detention centers quadrupled in size—from roughly 500,000 to 2.1 million people. The USA now has the largest penal system in the world. While the prison system looms large in and of itself, the true reach and impact of the growing corrections and criminal justice sector is immense, and its tentacles influence the social, economic and political life of all regions and sectors in the U.S. Along with America’s 2.1 million people incarcerated, 2.2 million citizens are now employed in policing, corrections and courts, overshadowing the 1.7 million Americans employed in higher education, and the 600,000 employed in public welfare. With 6.6 million people in prison and  jail, or on probation and parole, there are now 8.8 million people either under the control of the correctional system or working in the criminal justice sector.