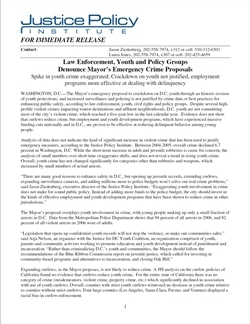 The Mayor’s emergency proposal to crackdown on D.C. youth through an historic erosion of youth protections, and increased surveillance and policing is not justified by crime data or best practices for enhancing public safety, according to law enforcement, youth, civil rights and policy groups. Despite several highprofile violent crimes impacting tourist destinations and affluent neighborhoods, D.C. youth are not committing most of the city’s violent crime, which reached a five-year low in the last calendar year. Evidence does not show that curfews reduce crime, but employment and youth  development programs, which have experienced  massive funding cuts nationally and in D.C., are  proven to be effective at reducing delinquent behavior among young people.