Creating the Roadmap for Reduction: Reducing the Number of Women in Prison in Alabama 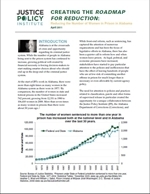 Alabama is at the crossroads of crisis and opportunity regarding its criminal justice system. While the number of people in Alabama being sent to the prison system has continued to increase, growing political will created by financial necessity is forcing decision-makers to start making smarter choices about who should end up in the deep-end of the criminal justice system.

While front-end reform, such as sentencing, has captured the attention of numerous organizations and has been the focus of legislative efforts in Alabama, there has also been a quieter call to reform how and when women leave prison. As legal, political, and economic pressures have increased, stakeholders have started to pay particular attention to the policies and inefficiencies that have the effect of leaving hundreds of people who are at low-risk of committing another offense in prison for much longer than is necessary or even allowable by current agency policy.

The need for attention to policies and practices related to classification, parole and other forms of supervised release in particular created the opportunity for a unique collaboration between the Justice Policy Institute, the Alabama Department of Corrections, and the Board of Pardons and Paroles. JPIworked closely with these agencies to build relationships and collect information to develop a set of recommendations focused primarily on classification and parole practices and policies that could quickly and safely move women into less restrictive environments and community based placements, thus reducing the number of women incarcerated in Alabama’s prisons.