Cost and Benefits? The Impact of Drug Imprisonment in New Jersey 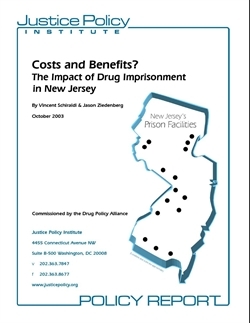 Of the country’s 2 million prisoners,450,000 are incarcerated in prison or jail for drug offenses—more people than the European Union, an entity with a 100 million more people, has in prison for all crimes combined. The 450,000 figure underestimates the role the “war on drugs” plays in the use of incarceration in the country: studies have shown that about a third of America’s prisoners tested positive for drugs or alcohol at the time of their offense.