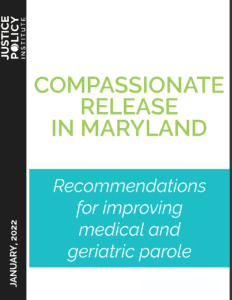 Most states have established release mechanisms for the aging population and those in prison who are battling a terminal illness, often referred to as compassionate release. Compassionate release policies typically permit individuals in prison to petition for early release after having served a pre-determined number of years for either health (medical parole) or advanced age (geriatric parole). However, the laws frequently have restrictive eligibility requirements and are applied sparingly, often when an individual is expected to survive only a matter of days or weeks.

While Maryland has both medical and geriatric parole options, approval is fleeting. Data are limited but provide a glimpse into their restricted use. Between 2015 and 2020, the Maryland Parole Commission approved 86 medical parole applications and denied 253. Further, the Governor granted nine medical parole requests from individuals serving life sentences and rejected 14 requests. Most notably, the lowest yearly approval rating occurred during the height of the pandemic in 2020 at seven percent. The Justice Reinvestment Act of 2016 expanded geriatric parole eligibility by lowering the age threshold from 65 to 60 years old. However, petitions are rarely approved. Currently, there are about 650 individuals over the age of 60 in Maryland’s prison system who have served at least 15 years. These individuals are eligible to be evaluated for release. But, like in most states, Maryland seldom relies on these compassionate release policies to release the elderly and infirm from prison, despite posing a minimal risk to public safety and a significant cost burden on the state budget.

Without substantial reforms to compassionate release in Maryland, the aging population will continue to grow, and the onus will be on the Department of Public Safety and Correctional Services (DPSCS) to provide the adequate care.