Cellblocks or Classrooms?: The Funding of Higher Education and Corrections and its Impact on African American Men 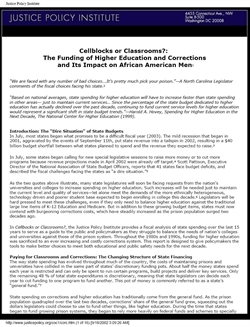 In July, most states began what promises to be a difficult fiscal year (2003). The mild recession that began in 2001, aggravated by the events of September 11th, put state revenue into a tailspin in 2002, resulting in a $40 billion budget shortfall between what states planned to spend and the revenue they expected to raise.

In July, some states began calling for new special legislative sessions to raise more money or to cut more programs because revenue projections made in April 2002 were already off target. Scott Pattison, Executive Director of the National Association of State Budget Officers, reports that 41 states face budget deficits, and described the fiscal challenges facing the states as “a dire situation.”