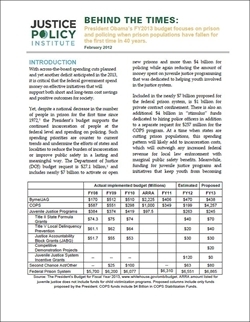 With across-the-board spending cuts planned and yet another deficit anticipated in the 2013, it is critical that the federal government spend money on effective initiatives that will support both short and long-term cost savings and positive outcomes for society.

Yet, despite a national decrease in the number of people in prison for the first time since 1972, the President’s budget supports the continued incarceration of people at the federal level and spending on policing. Such spending priorities are counter to current trends and undermine the efforts of states and localities to reduce the burden of incarceration or improve public safety in a lasting and meaningful way. The Department of Justice (DOJ) budget request is $27.1 billion, and includes nearly $7 billion to activate or open new prisons and more than $4 billion for policing while again reducing the amount of money spent on juvenile justice programming that was dedicated to helping youth involved in the justice system.