Baltimore Behind Bars: How to Reduce the Jail Population, Save Money and Improve Public Safety 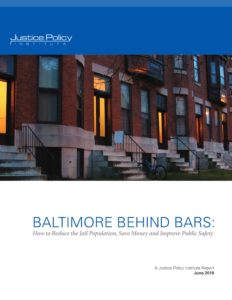 The Baltimore jail system is one of the oldest and largest pretrial facilities in the country, holding around 4,000 people on any given day. Despite recent, positive justice-related reforms in Baltimore and Maryland, the state’s solution to these crowded and old facilities is to build two new facilities in the middle of a recession, without plans to close the old wings. These wings will be used to house people displaced by future capital projects in pretrial detention in the jail and to expand the delivery of programs and services for adult men in the jail. It is past time for coming up with effective solutions that will create lasting reductions in the number of people incarcerated in the jail and long termgains in public safety. Before the state of Maryland spends millions of dollars to construct two new facilities for the jail, it and Baltimore City should develop and carry out a plan that will ensure that only the people who present a viable risk to public safety are held in the jail before their trial. Baltimore should be looking at innovative and evidence-based approaches to reducing the number of people going into and being detained in the jail, following the example of other jurisdictions around the country. The result will be a stronger and safer Baltimore for generations to come.