Bailing on Baltimore: Voices from the Front Lines of the Justice System

Using money in exchange for freedom, in the form of money bail for release pretrial, is unfair and ineffectual, according to Baltimore residents interviewed for the final report of the Justice Policy Institute (JPI) series on bail reform analysis. In Bailing on Baltimore: Voices from the Front Lines of the Justice System, Baltimoreans explain how money bail discriminates against low-income communities, with serious consequences for them and their families, and how for-profit bail bonding undermines the judicial system. 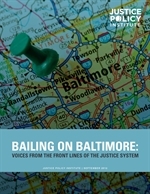 “The Baltimore bail system relies almost exclusively on financial terms of release, or money bail, which means that someone’s financial resources are a major factor in determining whether they have to sit in jail pending trial,” said Bailing on Baltimore author Jean Chung, who produced the report as an Emerson Hunger Fellow with JPI. “It’s a system that disproportionately locks up low-income people and perpetuates the vicious cycles of poverty and incarceration in those communities. It’s a failure. It’s unfair.”

Bailing on Baltimore is a qualitative analysis to connect the first two quantitative reports on money bail and the for-profit bail industry to the actual experiences of people who have been involved in the system. Interviews gathered the perspectives of residents who have been through the city’s pretrial justice system, practitioners from pretrial service agencies and both prosecuting and defense attorneys.