In September 2012, JPI released a series of three research re 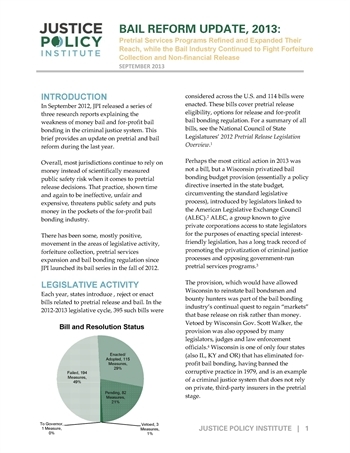 ports explaining the weakness of money bail and for-profit bail bonding in the criminal justice system. This brief provides an update on pretrial and bail reform during the last year and provides recommendations moving forward.

Overall, most jurisdictions continue to rely on money instead of scientifically measured public safety risk when it comes to pretrial release decisions. That practice, shown time and again to be ineffective, unfair and expensive, threatens public safety and puts money in the pockets of the for-profit bail bonding industry.

There has been some, mostly positive, movement in the areas of legislative activity, forfeiture collection, pretrial services expansion and bail bonding regulation since JPI launched its bail series in the fall of 2012.

Bail Fail: Why the U.S. Should End the Practice of Using Money for BailClick here for Bail Fail fact sheet

Bailing on Baltimore: Voices from the Front Lines of the justice System