Bail Fail: Why the U.S. Should End the Practice of Using Money for Bail

JPI’s newest analysis shows that the practice of using money to decide release while awaiting trial unfairly impacts low-income communities and should be replaced with alternatives that better protect public safety and reduce social and taxpayer costs.

Bail Fail: Why the U.S. Should End the Practice of Money for Bail shows how the average bail amount for people who are detained has more than doubled from $39,800 in 1992 to $89,900 in 2006. This is despite evidence that higher bail amounts are not related to more public safety and that people who are unable to afford money bail are often a lower risk of dangerousness or failure to appear in court – the two legal justifications to incarcerate someone pretrial – than those who can make bail. 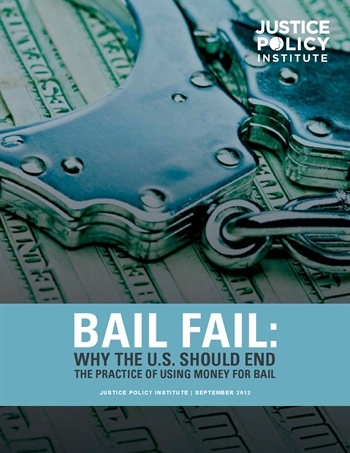 The report also highlights the fact that bail is a primary driver of growth in our jail populations and further states that people in U.S. jails are not convicted but are being held as they await the resolution of their charge. This time in detention hinders them from taking care of their families, jobs and communities while overcrowding jails and creating unsustainable budgets.”

The report is the first in a three-part series of analysis on bail, for-profit bail bonding and the community impacts slated for release throughout the month of September.