Addicted to Courts: How a Growing Dependence on Drug Courts Impacts People and Communities 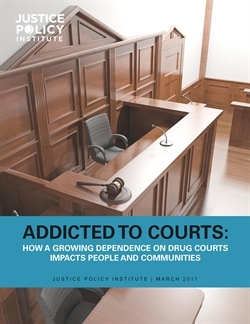 America’s growing reliance on drug courts is an ineffective allocation of scarce state resources. Drug courts can needlessly widen the net of criminal justice involvement, and cannot replace the need for improved treatment services in the community. Of the nearly 8 million people in the U.S. reporting needing treatment for drug use, less than one fourth of people classified with substance abuse or a dependence on drugs and/or alcohol receives treatment, and for those who do receive treatment, over 37 percent are referred by the criminal justice system.

While drug courts may be a better justice system option than incarceration, they are still a justice system approach to a public health issue. Drug courts also are not the most effective way to help people who are struggling with addiction, and in many ways, only serve to “widen the net” of U.S. criminal justice control, which now stands at about 7 million people either incarcerated or on probation or parole.

Certainly, drug courts can and do help some people who are drug dependent and who are engaged in illegal behavior. The questions that this report seeks to answer are why we have drug courts in the first place, whether we should continue to utilize and expand drug courts, and at what expense—in terms of both direct costs or opportunities foregone.

Drug Courts Reports from Other Organizations

Drug Policy Alliance, Drug Courts Are Not the Answer: Toward A Health-Centered Approach to Drug Use
National Association of Criminal Defense Lawyers, America’s Problem-Solving Courts: The Criminal Costs of Treatment and the Case for Reform