THE TIME IS NOW TO RAISE THE AGE OF CRIMINAL RESPONSIBILITY 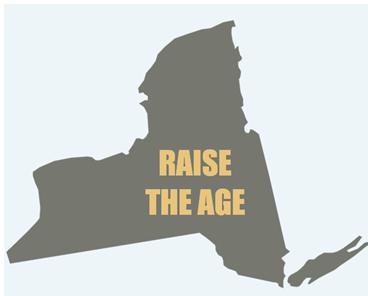 We, the undersigned organizations dedicated to the well-being of children and youth and other supporters, call on you to pass legislation to raise the age of criminal responsibility before this legislative session ends June 17th. We cannot wait any longer.

Currently, New York is one of only two states that still prosecute all 16- and 17 –year- olds in the justice system as adults. The tragic suicide of Kalief Browder illustrates the urgent need to raise the age immediately. Mr. Browder experienced all of the harms that result from prosecuting youth as adults, including the myriad barriers to real opportunities for personal and professional growth upon release.  We cannot lose another life as a result of this archaic policy.

Raising the age will not only mean safer, healthier outcomes for youth, but increased public safety for all New Yorkers.  Why? Prosecuting kids as adults increases crime, including violent crime. A study comparing youth charged in New York’s adult courts with youth charged with identical crimes in New Jersey’s juvenile courts found New York youth were 100% more likely to re-offend with a violent offense and 26% more likely to be re-incarcerated.  The Governor’s Commission on Youth, Public Safety, and Justice found that raising the age and reforming the justice system for youth would eliminate between 1,500 and 2,400 crime victimizations every five years.

Any legislation to Raise the Age must:

Our youth need and deserve your commitment to their success and investment in their futures that will allow them to thrive as members of our global community. Don’t let another young person languish, suffer, despair, hurt – die — and leave their dreams and wishes unfulfilled. Do the right thing and Raise the Age NOW.