New Report: Costs of Youth Confinement Estimate to Run into the Billions of Dollars Each Year

Washington, DC – Thirty-three U.S. states and jurisdictions spend $100,000 or more annually to incarcerate a young person, and continue to generate outcomes that result in even greater costs, according to a new report released today by the Justice Policy Institute (JPI). The report, Sticker Shock: Calculating the Full Price Tag for Youth Incarceration, produced the first-ever estimate of the overall costs resulting from negative outcomes associated with incarceration, and found that these long-term consequences of incarcerating young people could cost taxpayers $8 billion to $21 billion each year.

“Every year, the majority of states spend $100,000 or more to lock up youth who are mostly imprisoned for troubled behavior or nonviolent offenses,” said Marc Schindler, executive director of Justice Policy Institute. “And compared to the huge long-term costs to young people, their families, victims, and taxpayers, that’s really just the tip of the iceberg. This is a poor investment and we must do better.”

The billions of dollars in hidden costs result from formerly incarcerated young people earning lower wages, paying less in taxes, as well as having a greater dependence upon government assistance and higher rates of recidivism. Research shows that the experience of incarceration increases the likelihood that young people will commit a new offense in the future. 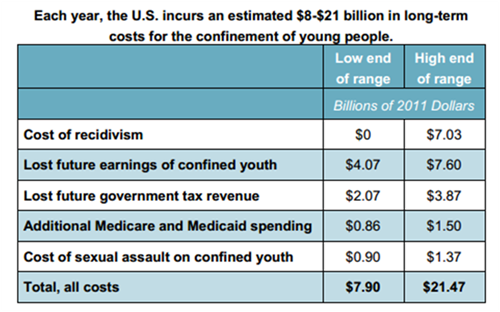 Beyond these costs, the report also notes that the system does not affect all young people equally. African American youth are incarcerated at a rate nearly five times that of white youth, and Hispanic/Latino youth at a rate twice as high as whites. Even though young people engage in similar behavior, there are differences in the way young people of color and white youth are treated.

“The significant and multi-faceted costs of incarceration paint a troubling picture for young people, their families and communities, as well as taxpayers,” said Marc Levin, director of the Center for Effective Justice at the Texas Public Policy Foundation. “Fortunately, proven alternatives to incarceration for holding youths accountable are not only cheaper, but most importantly are almost always the best answer for protecting the public and putting kids on the right track to being productive, law-abiding citizens.”

The best way to address the failures of the system is to just head them off altogether, according to the report. JPI recommended changing policies that promote states’ overreliance on incarceration, as well as shifting resources away from confinement and towards community-based solutions. Additionally, the report recommended removing some of the barriers that prevent states from placing youth in their home or close-to-home,and making appropriate investments in the right parts of the youth-serving system that can reduce long-term costs.

The report also identified a lack of data as another barrier to reform, and described ways to address the data shortfall, such as giving policy makers the tools to develop cost-effective analysis of youth programs, and expanding research opportunities to track the long-term hidden costs of incarcerating young people.

“The notion that we have to choose between public safety and incarceration is a false premise,” said Evelyn Lundberg Stratton, former Ohio Supreme Court Justice. “We’ve seen time and time again in places like Georgia and New York or California and Alabama that when states reduce their reliance on incarceration, it produces better outcomes for everyone.”

The Justice Policy Institute, based in Washington, D.C., is working to reduce the use of incarceration and the justice system and promote policies that improve the well-being of all people and communities. For more JPI publications on the justice system, visit www.justicepolicy.org.