JPI’s transitions has also included saying farewell to long-time Board of Directors Chair Peter Leone, Ph.D. Staff and board members appreciate Peter’s efforts in helping JPI push forward on both adult and juvenile justice reform and wish him well. Taking his place is long-time Board member Katharine Huffman, a principal for The Raben Group. We are excited to have Katharine at JPI’s helm.

Finally, in February, JPI welcomed back Jason Ziedenberg as Director of Research and Policy. Jason served in various positions over JPI’s 17-year tenure, including as executive director, and brings a wealth of research, advocacy and policy experience to JPI. He has already co-authored our report, Billion Dollar Divide: Virginia’s Corrections, Sentencing and Criminal Justice Challenge.

Our Work in Maryland and Virginia

JPI has continued its state-based, on-the-ground research and technical assistance work in Virginia. Starting in 2012, JPI helped to form a working group of advocates that meet regularly in Richmond in an effort to understand which justice system issues are of most concern in the commonwealth. In 2013, we helped organize a press conference applauding then-Gov. Bob McDonnell’s amendments to the commonwealth’s disenfranchisement policy with a host of advocates including the Advancement Project, the Virginia Alliance Against Mass Incarceration, the Virginia Baptist State Convention and Virginia CURE. Since that time, Gov. Terry McAuliffe has made further improvements to the restoration process for those seeking rights restoration.

At the end of 2013, we issued a briefing paper entitled Virginia’s Justice System: Expensive, Ineffective, Unfair and co-hosted an event unveiling the findings of the report with the Virginia Alliance Against Mass Incarceration. Last month, we released a report, Billion Dollar Divide: Virginia’s Corrections, Sentencing and Criminal Justice Challenge. Both reports received substantial media coverage, including articles, op-eds and editorials in the leading newspapers in the region, such as the Washington Post, Richmond Times-Dispatch, and the Virginian-Pilot as well as coverage on local radio and TV throughout Virginia. View an excerpt of footage from our April town hall and panel discussion in Richmond.

Additional work in Virginia included responding to the media on a high-profile case involving Travion Blount, who at 15 years old received six life sentences for participating in an armed robbery in Norfolk, Va. Our interviews were featured on truthdig.com and UprisingRadio.com.

Moving forward, we will continue to work with advocates and policymakers to encourage reform of Virginia’s justice system, including conducting further research, assisting advocates with communications strategies to aid in reform efforts and meeting with Virginia’s new class of policymakers. If you are interested in joining the working group and/or know anyone who has been impacted by Virginia’s justice policies, please contact us at [email protected].

We continue to lead the Baltimore Grassroots Criminal Justice Network and are happy to report this week’s major Ban the Box win! The Baltimore City Council voted 10-4 to pass legislation that knocks down employment barriers for people re-entering their communities. Click here to learn more. This year, we are also working on strategic plan with the Network to maintain momentum for progress and increase our partnerships in Maryland.

JPI has supported and been featured in film projects that have helped to propel the issue of juvenile and criminal justice into the mainstream.

In 2011, JPI partnered with filmmaker John Lucas to release a film that follows four young men who, in 1991, were sentenced in their late teens for a series of robberies in Ohio which garnered them prison sentences totaling 500 years, despite the fact that no one was ever injured. Funded, in part, by a grant from the MacArthur Foundation, JPI supported the production of the film and helped with promotion through social media. “Cooler Bandits” was an official selection of the Cleveland International Film Festival.

“Kids for Cash,” showing in select theaters and being privately screened across the country, follows several youth from Luzerne County, PA, who were unjustly detained by judges who sent them to juvenile prisons from which they had received financial kickbacks. The film highlights the work of our colleagues at the Juvenile Law Center (JLC) in Philadelphia who exposed the scandal, and continues to receive much acclaim from critics, policymakers, and advocates. It has been screened throughout the country at mainstream and independent theaters and on Capitol Hill. Its creators have published a discussion guide to accompany the film, which cites JPI. JPI’s Marc Schindler participated in a panel discussion which also featured Rep. Tony Cardenas (D-CA), Sen. Bob Casey (D-PA), several of the youth featured in the film, Marsha Levick of JLC, film director Robert May, and Dana Shoenberg from the Center on Children’s Law & Policy.

“Outcasts: Surviving the Culture of Rejection” explores what writer and director Stephen Newton calls the culture of rejection and why it may unwittingly contribute to the high rate of recidivism in Tennessee, where half of offenders return to prison within three years. Newton interviewed JPI’s Research and Grants Coordinator Paul Ashton on the impact of harsh policies and collateral consequences. Click here to read more. 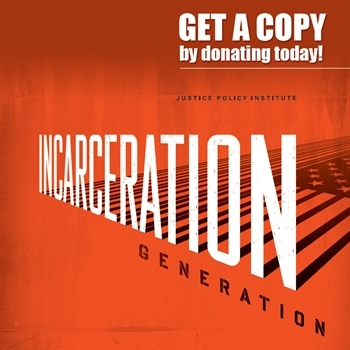 We shared “Incarceration Generation” last year at six book signings and discussions in Richmond, Va; Baltimore, Md; Washington, D.C. and New York City. The book received a review by filmmaker Stephen Newton, the MarylandReporter.com, the ICCA Journal of Community Corrections and is featured on Jean Trounstine’s Wonderful New Book List. The book and timeline posters are currently being used by DC’s Cesar Chavez Public Charter Schools for Public Policy students and is being considered by university campuses as text books.

To get a sneak peek of the book, click here. Purchase your copy today.

After being named executive director of JPI almost nine months ago, I continue to be honored to have the opportunity to lead such an important organization at such a critical time for justice reform in our country.

Over the past nine months, I have had the pleasure of meeting and working with committed advocates in several states, including through our work in Virginia and Maryland; participating in critical discussions on juvenile and criminal justice reforms throughout the country; and working with the JPI team to release two impactful reports in Virginia. I have also had the pleasure of re-connecting with many former colleagues in the juvenile and criminal justice field as well as meeting new allies.

I am also fortunate and honored to have received support from the Open Society Foundations’ New Executives Fund and I’m hoping to garner further assistance from supporters like you.

JPI is poised to build on these successes and provide much needed support and strategic leadership to our partners throughout the country in the fight against mass incarceration. Your financial support is critical to bringing fresh, data-driven ideas to justice reform. A contribution to JPI not only directly supports our research, it sends an important message: Safe and vibrant communities can be achieved through alternatives to incarceration.

With your help, we can get that much closer to reform.