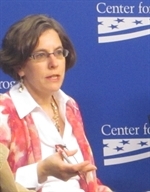 It’s been a busy quarter, but that’s how we like it — especially during our 15th anniversary year!

In the past few weeks, we’ve participated in a civil rights panel for the American Constitution Society at the Center for American Progress, as well as briefings to Congress on the issues of juvenile justice policies and private prisons.

For those of  you who follow us through our website, Facebook and Twitter, you have noticed our new JPI Daily News Digest, a one-stop-shop where you can find news as it relates to criminal justice reform news. We want to continue to be a resource to you in your work as practitioners, researchers, advocates and supporters of this work.

In this edition of our newsletter, you will learn about JPI’s new staff and board members, a new, cutting-edge research project that is underway, and policy gains in Maryland.

Continue to support our work by reading, clicking through and sharing our work with others and consider making a contribution so we can continue our efforts to reduce the use of incarceration and the justice system for another 15 years!

JPI is working on a series of reports about bail. The United States is one of only two countries that allows bail bonding, and the use of money to determine whether someone should be released while awaiting trial has serious impacts on communities, public safety, and jail populations. Similar private prisons (see Gaming the System: How the Political Strategies of Private Prison Companies Promote Ineffective Incarceration Policies), bail is yet another example of how the profit motive drives justice policies.

Look for these reports to come out this summer, and if you were forwarded this email, sign up to receive information directly when they are released!

The NetRoots Nation Conference is an annual event for bloggers to hone their craft of blogging for a cause and Zerline Hughes, JPI’s communications manager, has been nominated to receive a scholarship provided by Democracy For America to attend the convening. For the past year, JPI has dedicated its efforts to keep subscribers like you up to date on ours and others’ reform work and legislative gains through online efforts, which includes our Just Policy Blog. Please help us continue to do this work by helping to send JPI to this unique gathering by clicking here to cast your vote! 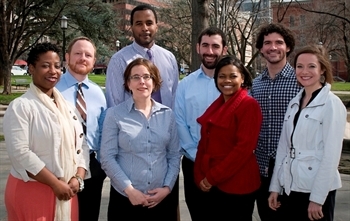 As spring is in full swing, JPI has blossomed into a new team welcoming new staff and board members. Melissa Neal and Spike Bradford recently joined JPI’s research department. Melissa comes to JPI after two years as an evaluations researcher conducting evaluations and developing performance monitoring frameworks for federal programs addressing child welfare and courts handling child abuse and neglect cases. Prior to that, she worked in Northeast Tennessee to co-found a not-for-profit agency providing services to women in prison and women re-entering the community after serving time in prison.

Prior to joining JPI, Spike lived in Kenya, where he taught English as a Foreign Language to adult learners and applied his data analysis skills to public health issues, especially related to women’s health. Spike has also worked at the Department of the Attorney General of Hawai`i to evaluate a variety of criminal and juvenile justice initiatives and oversee the collection of data for the Uniform Crime Reports. 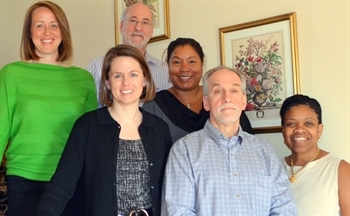 As we thank Jody Kent-Lavy for serving on our board of directors and supporting JPI’s mission, we welcome board members Beth Colgan (pictured on the far left) and Noah Drezner, PhD (pictured below). Beth  joined Stanford Law as a fellow in 2011 and was previously the Managing Attorney of the Institutions Project at Columbia Legal Services in Seattle, Washington focusing on class litigation and legislative advocacy on behalf of juveniles and adults.

Noah is an assistant professor at the University of Maryland, College Park. Beyond his primary appointment in College of Education’s Counseling, Higher Education, and Special Education department, he holds affiliate appointments in the International Education Policy specialization; the Consortium on Race, Gender, and Ethnicity; the Lesbian, Gay, Bisexual, and Transgender (LGBT) Studies program; and the Center on Philanthropy and Nonprofit Leadership in Maryland’s School of Public Policy. In 2011, Noah was named one of 13 university professors to the inaugural cohort of Honors College faculty.

Over the last several months, the Justice Policy Institute has worked directly with Baltimore City officials to remove a discriminatory provision in city contracts as they relate to individuals with criminal records. In October of last year, the City of Baltimore sent out request for proposals (RFP) for lead abatement and weatherization contracts. However, the RFPs contained language prohibiting individuals with criminal records from working under the contracts. The Justice Policy Institute organized representatives of the Greater Baltimore Criminal Justice Network and met with the Baltimore Mayor’s office, the City Law Department and other city officials to articulate our concerns and express our desire to work with the city to amend the language.

As a result, the original provision was pulled and replaced with language that JPI helped draft. A new lead/weatherization contract has since been awarded and network participant, Living Classroom, was awarded a contract.

The Justice Policy Institute also worked closely with Maryland advocates on a number of legislative proposals. While these proposals weren’t approved, they offered the opportunity to educate policymakers about the need for change in the following areas:

JPI was also instrumental in helping the Maryland Restorative Justice Initiative continue its fight to “take the politics out of parole” as Maryland Gov. Martin O’Malley – for the first time – commuted and paroled the sentences of two people that were incarcerated as youth. Read the op-ed by MRJI Executive Director Walter Lomax published by the Washington Post in March.

JPI in the News