“Incarceration Generation” includes essays from 21 researchers and advocates who highlight the specific populations affected by mass incarceration, as well as the different aspects of our practice and procedures that propel these populations into the justice system. The book also features a foreword written by New York Times bestseller Michelle Alexander, author of “The New Jim Crow: Mass Incarceration in the Age of Colorblindess.”

The soft cover, 10×10-sized book includes a pull-out timeline poster that graphically displays the ramping up of punitive, ineffective and costly juvenile and criminal justice policies. The timeline from 1969 to 2013 includes events such as the creation of the Drug Enforcement Administration (DEA) by President Richard Nixon, and legislation to stiffen drug offense sentences in 1973 supported by New York Gov. Nelson Rockefeller. 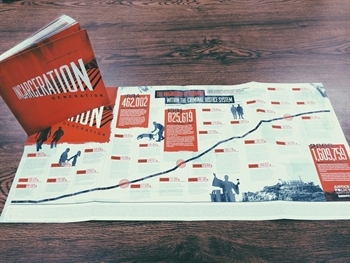 The poster also highlights events such as the creation of the Corrections Corporation of America in 1983 and the growth of the private prison market, the stream of popular culture television programming on the criminal justice system in the late 1980s, and the fatal shooting of African-American teenager Trayvon Martin by local vigilante George Zimmerman in 2012.

The Justice Policy Institute, based in Washington, DC, is working to reduce the use of incarceration and the justice system and promote policies that improve the well-being of all people and communities. For more JPI reports on the criminal justice system, please visit our website at www.justicepolicy.org.